The SE’s and SXT’s main package is a single-DVD entertainment bundle that adds the R/T’s standard touchscreen and audio system along with a 9-inch second-row display screen and an HDMI input. The SXT can be outfitted with a Dual DVD/Blu-ray Entertainment package that boasts 9-inch screens for both the second and third rows as well as the touchscreen display, rearview camera and a few other standard R/T features. A more affordable Uconnect Hands-Free Group offers Bluetooth audio connectivity. The R/T is eligible for the Blu-ray system as well, and all Grand Caravans with the touchscreen can be equipped with an integrated Garmin navigation system. The R/T’s Driver Convenience Group adds Bluetooth audio connectivity, heated front- and second-row seats, a heated steering wheel and second- and third-row window shades. The Safety Sphere Group (also R/T only) adds blind-spot monitoring, rear cross-path detection and an auto-dimming rearview mirror.

If these sound nice to you then come to Woodys Automotive Group, where we have several to choose from! Call us at (888)869-0963! For hours and directions click here! 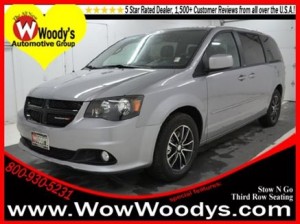